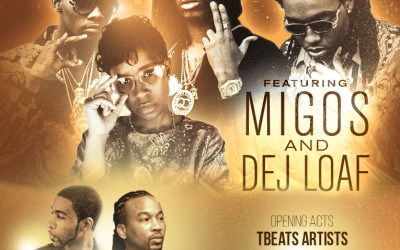 On Saturday October 24, 2015, join the TBeats Recording Artists, Kingpin and Marty Griptite as they storm the stage with hip hp artists, the Migos and Dej Loaf! Student pricing is available and early ordering is highly encouraged. Tickets are selling quickly so log on to http://hssu.edu and order yours today! Contact us for booking or studio time: Website: www.tbeatsstudio.com Email: info@tbeatsstudio.com Phone:... END_OF_DOCUMENT_TOKEN_TO_BE_REPLACED 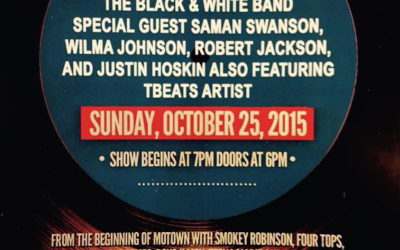 TBeats Entertainment Recording Artists, Brianna Elise and Gabbii will be featured on a Motown review in St. Louis at the LUX on October 25, 2015. Don’t miss out and be prepared to dance the night away! When: Sunday October 25, 2015 Time: Doors open at 6pm Where: 2619 Washington Avenue, St. Louis... END_OF_DOCUMENT_TOKEN_TO_BE_REPLACED 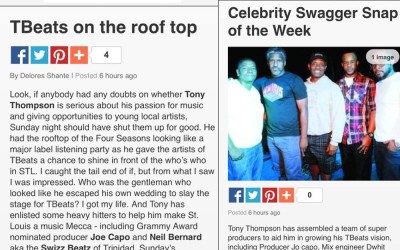 On September 27th, TBeats Studio hosted a listening party at the Four Seasons on the rooftop. To say the night was incredible is an under statement. TBeats recording artists, Brianna Elise Brown, Gabbii, Kingpin and Marty Griptite took the stage with a storm and showed St. Louis fresh and exciting new talent. The show was opened by B.Austin Recording artist Anthony Russo who is a pop singer and Independent recording artist Bigg Rich who is a rap artist. All of the artist that took the stage completely impressed the capacity filled room and were featured in an article written by the St. Louis American newspaper with a raving review. Our own Marty Griptite was mentioned with the comment, “Who was the gentleman who looked like he escaped his own wedding to slay the stage for TBeats?” We are honored at the review and excited to bring even more concerts and more talent over the coming... END_OF_DOCUMENT_TOKEN_TO_BE_REPLACED 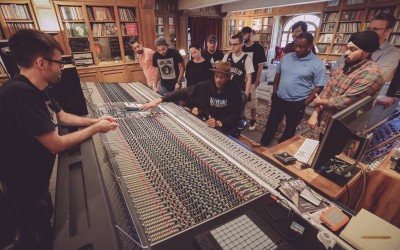 TBeats Studio / Tbeats Entertainment owner and CEO, Tony Thompson was in the South of France studying at La Fabrique with Grammy Award winning producer and engineer, Young Guru the week of August 24th for 7 days for the Mix with the Masters, education series. Young Guru is known for his work with Jay-Z and Alicia Keys on the remarkable song, Empire State of Mind. The students were hand picked based upon music that was submitted from a list over 1000 applicants. Lessons ranged from productionset-up to mixing and mastering strategies. Producers who attended had experience working with artists such as Drake, Eminem, Wiz Kalifa, Neo and more. Tony Thompson is now certified as a master producer and is taking TBeats Studios to... END_OF_DOCUMENT_TOKEN_TO_BE_REPLACED 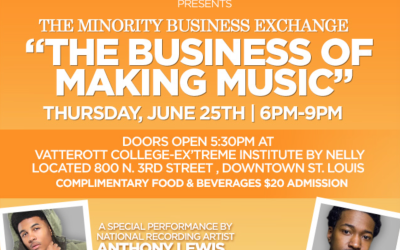 On June 25, 2015, CEO of Tbeats Tony Thompson sat on a panel discussing music and the business of making music along with Atlantic Recording Label executives. This event was sponsored by the Minority Business Exchange. The event had over 100 eager artists, producers, and engineers that had a chance to engage with the panelists with question and answer sessions and even network with nationally known music labels and local labels. The event was a night to remember for all who attended.... END_OF_DOCUMENT_TOKEN_TO_BE_REPLACED 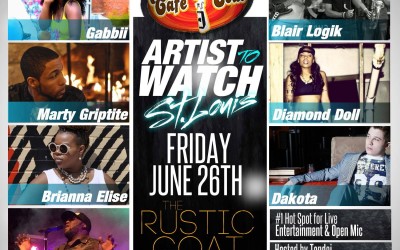 Join the TBeats Team on June 26, 2015 at the Rustic Goat in St. Louis for CafeSoul! It’s a night you won’t forget!     END_OF_DOCUMENT_TOKEN_TO_BE_REPLACED 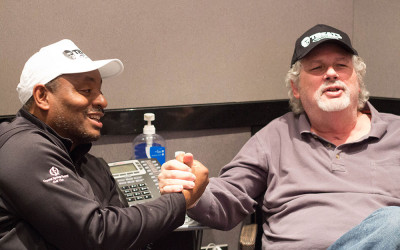 Recently, TBeats and their staff took a trip to L.A. to meet with Grammy Award winning mix engineer, Dave Pensado. Dave Pensado is a Grammy Award-winning mix engineer. He cut his teeth in Atlanta in the 1970s and 1980s doing live and studio sound engineering. In 1990 he moved to Los Angeles. He mixes between 200 and 250 songs a year, and has a residency at Larrabee Studios in Los Angeles. On September 12, 2011, he started a weekly show called Pensado’s Place with Herb Trawick. The show is about engineering techniques and interviews a guest Mixer, Producer or Artist each episode. On July 20, 2013, Dave Pensado and Herb Trawick hosted an event at Vintage King Los Angeles called “Pensado Gear Expo 2013.” More than one thousand people from around the world attended. 22-time Grammy Award winning engineer, Al Schmitt, Steven Slate, Alex da Kid, Ryan Hewitt, and Robert Duncan[disambiguation needed] were a few of the featured guests of the expo. The trip was more than successful. After a tour of the facility, Dave and Tony Thompson of TBeats sat down to discuss the latest trends in the industry, how to improve upon sounds, methodology and more. Dave and Tony have become fast friends. TBeats plans to work with him professionally in the near... END_OF_DOCUMENT_TOKEN_TO_BE_REPLACED 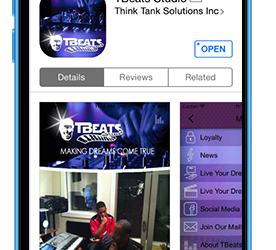 Want to get the latest updates and rewards from TBeats? Download the app available on iphone and ipad... END_OF_DOCUMENT_TOKEN_TO_BE_REPLACED 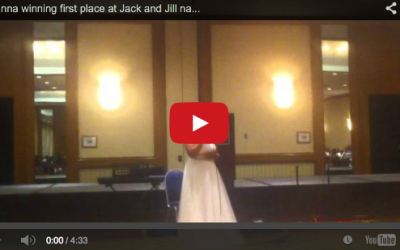 Watch Brianna as she receives first place at a Jack and Jill National Teen Leadership conference in Oklahoma for... END_OF_DOCUMENT_TOKEN_TO_BE_REPLACED 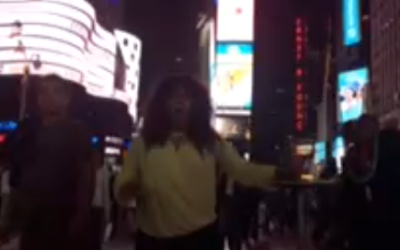 Brianna On The Streets Of New York

Recently Brianna was on the streets of New York. While there, she was asked, “Will you sing right now on these streets?” She answered with a resounding YES! Take a listen as she amazes everyone with her acoustic, soulful... END_OF_DOCUMENT_TOKEN_TO_BE_REPLACED
« Older Entries
Next Entries »