A successful businessman builds hope through music and scholarships

ST. LOUIS • The ambient music Tony Thompson is listening to is his own. He creates the jazz instrumental pieces when he needs to unwind or escape.

And, sadly, to ease the pain.

“Without music, I’d have lost my mind by now,” Thompson says from his office on Washington Avenue.

It’s here, at Kwame Building Group, the construction management firm Thompson founded in 1991, where he has built a music studio, an expansion of his foundation aimed at providing educational opportunities for minorities.

It’s one of several ways he has opened doors to those who might not have otherwise had access. The most notable comes in the form of a long list of scholarships, which have made available more than $1.1 million over 12 years. Kwame Foundation’s annual golf tournament each August serves as the sole fundraiser for the scholarships.

But his newest effort is a music studio summer camp that just finished up its second year and spawned a record label: TBeats.

It’s a fitting addition to Thompson’s efforts. He has always been a music lover, playing keyboards in the University City High School jazz band, which led to a music scholarship offer by the University of Kentucky. Instead, he accepted a scholarship to attend the University of Kansas, where he graduated with a bachelor’s degree in architectural engineering and environmental design.

It would prove to be a successful path for Thompson, 55, landing him jobs with the U.S. Army Corps of Engineers, Monsanto and Anheuser-Busch, before he struck out on his own.

But as he built his career, he never stopped creating music. Even if it was just in his mind. As his company grew, his brother, Tyrone, who had been a police officer for 20 years, became his right-hand man, serving as head of facility maintenance and management. Both worked to mentor young black men. Both knew the power of a good education. The two men were best friends, their offices next to each other.

Six years ago, Tyrone was gunned down, the victim of a robbery attempt that ended in a shootout. He was 47.

“I’d wake up at 3 a.m., right after my brother passed, thinking of him,” Thompson said. During those restless nights, he would write music, including a tune inspired by Tyrone.

“It’s called ‘Brother,’” he said of the song he cued up on his phone. As the song played through the studio speakers, Thompson faded into a world of memories. His face held both pain and a smile. As time has a way of doing, each passing day becomes more bearable. That was slowly happening for Thompson.

That’s when Tyrone’s son, Tyrell, 28, was shot and killed during a street robbery, walking with his girlfriend in the Central West End. 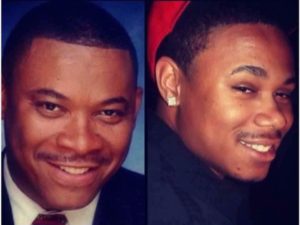 Check out the Lyrical Video for So In Love